What are serum proteins? 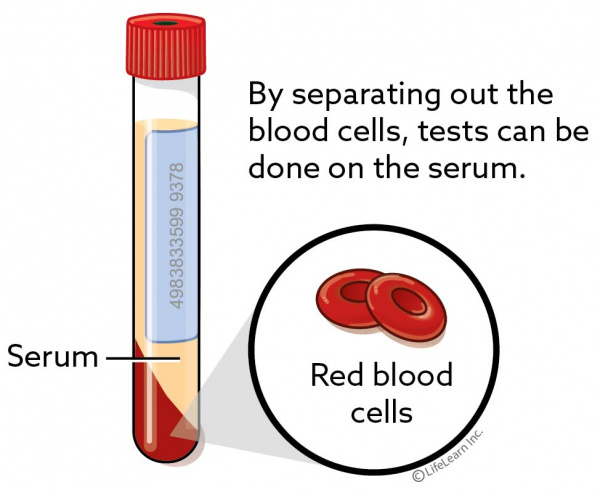 Serum is the liquid portion of blood from which the red blood cells, white blood cells, and factors involved in blood clotting have been removed.

Serum contains a large number of proteins that perform diverse functions. These functions include providing cellular nutrition, defending against infections, playing a role in inflammation, and acting as hormones or enzymes.

What is protein electrophoresis?

Protein electrophoresis is a specialized test that analyzes specific groups of proteins in the blood serum and measures how much of each group of protein is present. Individual proteins have distinctive sizes and electrical charges.

"Electrophoresis separates the serum proteins into broad groups
based on their size and electrical charge."

Electrophoresis separates the serum proteins into broad groups based on their size and electrical charge. The results of the analysis are displayed on a special graph, and the pattern of the different proteins is used to help diagnose specific diseases, including some types of cancer.

What sample is needed?

Protein electrophoresis is performed on serum, and a simple blood sample is all that is required.

What proteins does the test measure?

There are many different proteins in the blood, but protein electrophoresis looks at only two classes of protein, called albumin and globulin. There is only one type of albumin and it is found in relatively constant levels in the blood; it is a versatile protein with a variety of important roles, including transporting substances through the body. In contrast, there are many types of globulin, each of which has a specific function. Levels of globulin are more variable than albumin, and tend to rise in the presence of illness or disease.

When a blood sample is analyzed by routine methods, the albumin and total globulin levels are measured. Protein electrophoresis goes further and separates total globulin into its component parts, called globulin fractions, which are then measured individually. By analyzing the types and amounts of the various proteins in the blood, it is often possible to determine the nature of the disease that is causing illness in the pet.

Why are globulins important?

Globulins play an important role in the body's defense system; some are 'first responders', like firefighters, and appear in the blood stream quickly after any tissue injury. Others, called antibodies, are produced by lymphoid cells, a type of white blood cell, and appear in the blood stream more slowly following injury. Antibodies are essential to the body's ability to defend against invading bacteria and other disease-causing organisms.

In most cases, a high total globulin level in the blood indicates underlying inflammation or infectious disease, but sometimes it indicates the presence of cancer, especially involving lymphoid cells. By determining the type and distribution of globulins, protein electrophoresis can help your veterinarian decide what kind of disease might be present.

How does the test work?

Protein electrophoresis is like sorting a bowl of mixed colored beads into separate groups according to color and size, and then counting how many beads are in each group. The basis of the test is the fact that albumin and the various globulins are different sizes, and that each type of protein carries a different electrical charge, like static electricity. The serum sample is prepared and placed on a special grid. When an electrical current is applied, the various proteins migrate across the grid at different speeds, causing them to separate into groups according to size and electrical charge.

"The basis of the test is the fact that albumin and the various globulins are different sizes, and that each type of protein carries a different electrical charge, like static electricity."

For example, albumin is quite a small molecule and carries a lot of 'static electricity'; it travels the farthest and the fastest of all the proteins and is always the first one to appear on the graph. Globulins, in general, are larger and move more slowly, and antibodies, which are largest of the globulins and have the least 'static electricity', move very slowly and are the last ones to appear on the graph.

Once the proteins are separated into their groups, the amount of each protein can be measured, and the results displayed in a graph. The shape of the graph helps your veterinarian to understand the underlying disease.

How is the graph interpreted?

The main consideration when interpreting the electrophoresis graph is whether the globulin is elevated because of an increase in many different globulins or because of an increase in only one type of globulin. When many different globulins are elevated, it is called a polyclonal increase (poly = many; clonal = type); when only a single type of globulin is responsible for the increase, it is called a monoclonal increase (mono = one; clonal = type).

Inflammation is typically polyclonal, while lymphoid tumors are more likely to be monoclonal. Unfortunately, there is some overlap between these two general classifications.

Do the results always give a definitive diagnosis?

No, but some serious diseases, both inflammatory and neoplastic (disease condition that causes tumor growth), produce a characteristic pattern on the electrophoresis graph that can lead quickly to a definitive diagnosis. In many inflammatory conditions, protein electrophoresis can provide valuable clues about the severity of the inflammation, where it might be localized, and what might be causing it.

© Copyright 2020 LifeLearn Inc. Used and/or modified with permission under license.